Women must press on

If inclusion and diversity were two people, how would they be feeling? They have had a lot of attention recently; centre-stage to communicate lifetimes of individual’s frustrations. Lives impacted by something as random as gender, age, ethnicity, sexual orientation, social class and disability. As a feminist, it is heartening to witness more female business leaders.

The potential impact is even more inspiring. If the transformation is carried out mindfully, the momentum could kickstart a process with long-reaching impact on corporate culture, relationships, results and future-focused ethics. But a stubborn question remains: are the business and political worlds ready for women to be women, rather than to emulate men?

Do enough women have the courage to do it “their way”? Having just completed six months studying leadership at IMI, our class of 40 debated dozens of frameworks and theories about what makes an effective leader. How wide is the gap between business school belief and commercial reality? Leadership is complex and the traditional view of it is history.

Leaders could only be male and born to it. Eventually, as researchers became frustrated in the search for an ideal set of leadership characteristics, the trend gave way to examination of how a leader behaves in solving organisational dilemmas. Frameworks were built around getting a job done, with or without consideration for relationships along the way.

Next, recognising that people were more than stumbling blocks, charismatic style became heralded as critical for leaders, until events leading to the global recession exemplified how the blind influence of charisma led many organisations to ruin. The crash and resultant erosion of trust gave birth to today’s desire for authenticity, transparency and ethical effectiveness, combined with relationships, results and actions from integrity. 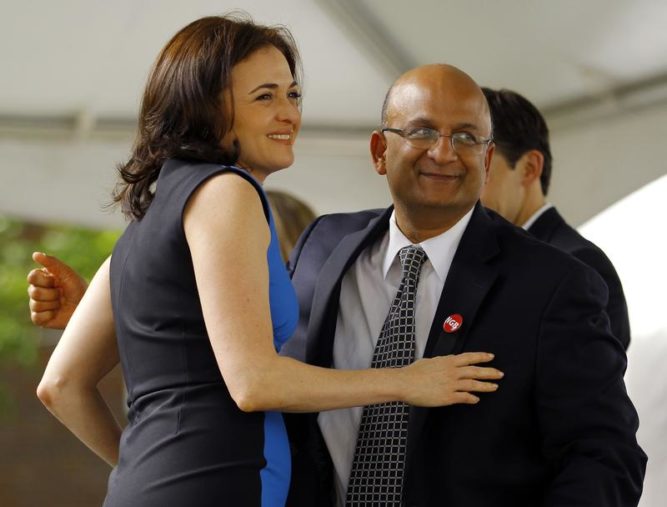 Business leaders must plan with a clear vision, inspire people (followers) to join them in exceptional performance towards this agreed future and, finally, deliver it. Easy? Not always. Nitin Norhia, dean of Harvard Business School, defines inspiration as “about being ‘authentic’, your true self, sharing what you believe in… and shining at making the complex simple.”

Norhia is pictured above with Facebook’s Sheryl Sandberg, author of the Lean In bestseller.

UK academics Goffee & Jones add that followers expect ‘authenticity’ from their leaders and to feel “significant as part of a community”. While a leader is transparent and working to strengths, they need to encourage those around them to excel at being themselves. No one needs to be perfect. In fact, bringing together skills and strengths is how a great team is built.

As organisation culture generally flows from the top down, theory suggests a leader’s emotional intelligence and competencies across self-awareness, self-management, relationship management and social awareness make an impact. For example, Donald Trump’s coercive style and Steve Jobs’ pacesetting at Apple are often discussed.

But kinder approaches like affiliative, visionary, democratic and coaching styles are also effective in certain situations. When Europe were underdogs during the 2014 Ryder Cup, Paul McGinley’s affiliative leadership engendered team harmony to overcome conflict and stood out against the US team’s emphasis on resilience and authority-based influence.

Nelson Mandela famously changed South Africa’s history with his visionary abilities. Google’s democratic approach to product development earns buy-in along their route to market. More recently, Gareth Southgate’s bonding of England’s World Cup soccer squad turned a completely new leaf for English football as they made it to the semi-finals.

Across our own careers, some of the best leaders we meet are adapting their style to each situation. In the 1980s and 1990s women had to be tough to break the glass ceiling and gain credibility, but surely those days are behind us? Perhaps by embracing empathy, women can reverse the HR polls revealing male bosses preferred over women during the past 50 years?

We might even see Hillary Clinton showcase her more female side in her next role. To be fully transformational, the idea of ‘inclusion’ and ‘diversity’ needs an honest mind shift. These two words extend beyond gender, clubs, third level courses and privileged schools.

In fact, our country’s new cultural diversity is rich and can propel us into world markets. To achieve this vision and maximise Ireland’s potential, we need authentic leaders who have integrity, can excite, inspire and adapt their style to situations, while recognising the value of difference. At the end of the day, Carlyle’s Great Man theory is a thing of the past. Agreed?

Su Duff runs The Answer, a panel of marketers for interim marketing projects. She is also head of business development for the Association of Advertisers in Ireland (AAI)

View all posts by Michael Cullen →
Milking it
Fanning on Frenemies: threats to adland