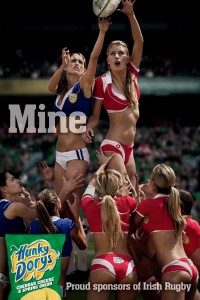 The Hunky Dorys crisps ads featuring women in revealing tops playing rugby under straplines such as ‘Are you staring at my crisps?’ and ‘Tackle these’ has been banned by the Advertising Standards Authority of Ireland (ASAI) after 300 complaints from members of the public and a threat of legal action by the IRFU.

The ASAI said it made the decision to pull the ads due to the widespread criticism. The IRFU was up in arms about the ads because of the reference to ‘proud sponsor of Irish rugby’ . Largo Foods boss Raymond Coyle defended the use of the line, saying it was a reference to his company’s sponsorship of the Navan rugby team.

ASAI chief executive Frank Goodman said a decision on the complaints it had received would be published later this month. The job of removing the posters was underway and is expected to be completed this week.