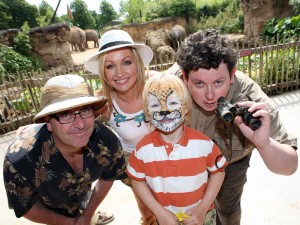 Colm Hayes (pictured left) and Lucy Kennedy will stand in for Gerry Ryan, who died recently, as presenters of the weekday morning show on 2FM from 9am today. The pair will host the three-hour show for four weeks after which time head of 2FM John McMahon is due to name a permanent successor for Ryan.

Hayes, who joined RTE from FM104, co-presents The Colm and Jim-Jim Breakfast Show on 2FM with Jim Nugent, while Lucy Kennedy, the face of the Bord Gáis ‘Big Switch’ campaign who is best known to RTE viewers as host of The Podge & Rodge Show, is new to the radio station’s schedule.

RTE is trying to keep a sense of continuity to its 2FM schedule in an effort to hold on to Ryan’s 300,000-plus audience. The show’s large production team and the Nob Nation comedy item will remain on.