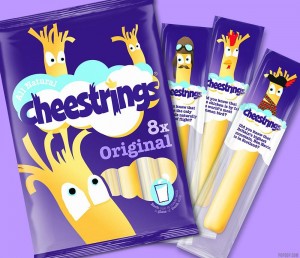 The Broadcasting Authority of Ireland (BAI) today announced the outcomes of a public consultation undertaken on the rules to be applied to the advertising of high fat, salt and sugar (HFSS) food and drink to children. The rules will come into effect next July and will apply to all radio and TV broadcasters in the Republic. The BAI has decided to adopt the nutrient profiling model as proposed in its recent consultation.

The model will be used to determine whether a food or drink being advertised is one that is high in fat, salt or sugar and subject to additional regulation by the BAI. Upon the recommendation of the Department of Health, ads and other commercial communications for cheese will be exempt. That means that the new BAI rules applying to HFSS food and drink will not impact on ads for brands like Cheestrings.

The NDC welcomes the BAI decision to continue to allow cheese advertising to children.

The BAI is adopting the Department of Health’s recommendation that cheese ads will include an on-screen message showing the recommended maximum daily consumption limit for cheese. The BAI is adopting the rules proposed in the draft children’s code in respect to HFSS food and drink. Commercial messages for HFSS food and drink will not be banned from children’s TV programmes as defined by the code.

Content rules will apply to commercial communications for HFSS food and drink that are broadcast outside of children’s programmes, but which are aimed at children. Such communications shall not include celebrities or sports stars, characters like Peppa Pig, licensed movie characters, health or nutrition claims and promotions.

A limit of 25 per cent of advertising sold by a broadcaster can be for HFSS food and drink. No more than one in four ads included in any break can be for HFSS food and drink. BAI chief executive Michael O’Keeffe said the new codes were  completed after extensive consultations undertaken by the BAI. The process began in September last year with a public consultation report prepared by a special working group.

In March, draft codes were published and a second round of public consultation was undertaken. The BAI met with key stakeholders, including the Association of Advertisers (AAI), IAPI and the NDC. The new rules will be formally launched by the BAI next January. The BAI says it will launch measures before the July implementation date aimed at assisting broadcasters and industry bodies with adopting the new ad rules.

Foods and drinks that will be restricted by the new code include potato crisps, most breakfast cereals, biscuits and cakes, confectionery, most French fries, most pizzas, mayonnaise, colas and other carbonated sweetened drinks, most sausages and burgers, butter and margarine, sweetened milkshakes and sweetened fruit juices.

In a statement about the new rules, the AAI welcomed the BAI’s recognition that this limited modification is proof that the UK model is flawed in how it is devised, but believes that it shows the overall flawed nature and unsuitability of the UK model in that it could lead to one product with a similar fat or salt content being exempted from the restrictions, while including a similar product content in the restriction.

The AAI says experts in Ireland, including professors of nutrition, were not consulted in the assessment and validation of the proposed UK model. Obesity is a highly complex problem and one that is rightly of concern to society. AAI, along with other organisations, is of the view that these complexities and the lack of evidence in singling out advertising require complex solutions.

The real solution to obesity lies in better education programmes that would include how to have a balanced diet, how to manage food and drink consumption, encouraging regular physical activity and generally developing an holistic approach to looking after oneself. Food producers have dramatically reduced their TV advertising at children’s programme times and this is shown in an RTE analysis of food advertising on RTE2 which would have had a traditional strong children’s programme content.

The AAI says analysis showed that advertising of what might be seen as foods high in fats, salts and sugars, dropped between 2002 and 2011, from 37 per cent to seven per cent of ads featured. The Australian Broadcasting Commission, the equivalent body to the BAI, decided that it does not see a justification for an ad ban, that the evidence to justify it is inadequate and that it did not support the British model.