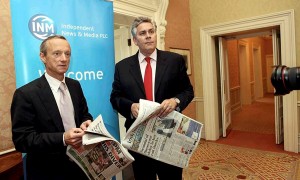 There is much speculation as to what Denis O’Brien’s next move might be now that Independent News & Media (INM) chief operating officer Vincent Crowley (pictured left) has replaced Gavin O’Reilly (right) as group CEO. The move is seen as a way of ending O’Brien’s attempt to oust O’Reilly at the group’s AGM in June.

O’Reilly’s resignation ends a 19-year stay at INM and almost 40 years of the O’Reilly family’s control of Ireland’s biggest media group. The move coincides with an unnamed investor taking a two per cent stake in INM. It is expected O’Brien may now try to reinstate his business colleague Leslie Buckley to the board.

Buckley was voted off the INM board after advisors questioned the Corkman’s independence. O’Brien has a 22 per cent stake in the group, while the O’Reillys have 13 per cent. Financier Dermot Desmond has six per cent equity. The new anonymous investor’s two per cent stake is the equivalent of 12 million shares.

O’Brien’s representatives on the INM board, Paul Connolly and Lucy Gaffney, opposed the appointment of lawyer James Osborne as chairman, following the departure of Brian Hillery last year. Crowley, 58,  is a chartered accountant who joined INM from KPMG in 1990. He supports cost-cutting measures.