Gallagher to talk on Twittergate 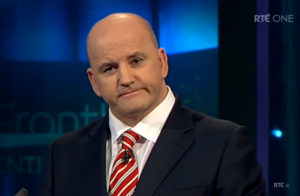 Sean Gallagher, whose hopes of becoming President of Ireland were dashed by a tweet read out by Pat Kenny on RTE’s Frontline current affairs show shortly before polling day last October, will speak at the Media Future conference in Dun Laoghaire next month. It will be the first time the Cavan-born businessman and former Dragons’ Den investor has publicly commented on the fallout from the infamous tweet.

Media Future organiser Jack Murray said Gallagher’s appearance at the conference on May 15 will be by way of an interview that will look at his presidential campaign and focus on the role social media and the Frontline debate played in the election result. RTE was widely criticised for the manner in which it dealt with ‘Twittergate’.

The two-day conference will be held in the Pavilion Theatre in Dun Laoghaire on May 14/15. Other speakers include Josh Macht, Harvard Business Review;  Raju Narisetti, Wall Street Review; Laura Evans, Washington Post and Bilal Randeree, Al Jazeera Europe. To book, go to www.mediafuture.ie