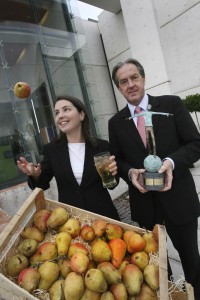 Bord Bia has invited six agencies to pitch for its consumer PR account. The agencies in question are Drury, Edelman, Elevate, Slattery Communications, WHPR and the incumbent, FTI Consulting. A decision on the awarding of the contract, which may run for up to three years, is expected before Christmas. The food promotion agency published a “qualification questionnaire’ to narrow down the number of possible applicants.

The achievements and contributions of nine Irish food companies were recognised at the recent Bord Bia Food and Drink Awards. The awards, which are held every two years, reward food and drink excellence across seven categories – exports, branding, enterprise, success at home, sustainability, consumer insight and innovation. Minister for Agriculture Food & the Marine Simon Coveney said that at a macro level the record €9 billion exports achieved by food and drink companies in 2012 is likely to be surpassed this year.

•   Export Award – Glenmar Shellfish<http://www.glenmarshellfish.com/>. Based in Union Hall, Co. Cork and established over 30 years ago, Glenmar is currently exporting over 2,000 tonnes of shellfish each year to markets such as China, Hong Kong, Korea, Italy, Spain, France and Croatia. They export to seven overseas markets on a daily basis and exports account for 75 per cent of company turnover.

•  Innovation Award – Paganini for FitFuel<http://www.paganini.ie/>, a protein enriched ice cream range. FitFuel Perform is a recovery product for sportspeople and recreational athletes, while FitFuel Nourish is used by healthcare professionals to boost the protein intake of patients. Paganini was founded by Wexford dairy farmer Tomas Murphy in 1990 and today the company exports to the UK and the Middle East.

•  Success at Home Award – Britvic Ireland for MiWadi<http://www.britvic.com/>, the number one dilute brand in Ireland. Miwadi impressed the judges with a 41 per cent yearly average value market share, having achieved major success in recent years with the relaunch of MiWadi, and the launch of double concentrate and no added sugar flavours. Britvic”s Kevin Donnelly won the Marketing.ie Marketer of the Year in 2012.

•  Sustainability Award – Dawn Meats<http://www.dawnmeats.com/>, the Waterford based meat exporter, has formalised its approach to sustainability and set a number of demanding targets as part of Origin Green, Bord Bia’s sustainability development programme. Dawn Meats is working to reduce water use by 40 per cent, reduce energy consumption by 40 per cent and to reduce its direct carbon footprint by a half.

•  Branding Award – Keelings<http://www.keelings.com/>, the family owned fresh produce business started producing fruits and salads in the 1930’s and today the company employs approximately 2,000 people and has a turnover of €300 million per year. The Keelings brand, with its strapline “Love to Grow”, was launched in 2010 and is the most recognised brand for fruit and vegetables in Irish supermarkets.

• Consumer Insight Award – Kerry Foods for Cheestrings<http://www.kerrygroup.com/>, a brand, worth about€90 million, and available in over 25,000 stores worldwide. The judges were most impressed by the detailed consumer research undertaken by Kerry in advance of entering the German market. The resultant consumer insight helped build its product positioning which has led to a million packs being sold every month in German stores.  Denis O’Riordan won the Marketing.ie Marketer of the Year in 1998.

This year, Bord Bia introduced a new award to honour an online champion . Pat Whelan of James Whelan Butchers<http://www.jameswhelanbutchers.com/>, Ireland’s first online butcher, was awarded the title as a ‘best in class’ example of how to increase sales and brand awareness through online and social media.

ABP Ireland<http://www.abpfoodgroup.com/divisions/abp-beef/our-companies/abp-ireland/> was honoured with the inaugural business referral award.