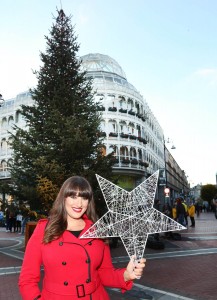 TV3’s Elaine Crowley has teamed up with Focus Ireland to launch the charity’s annual Sponsor A Star campaign which aims to raise over €250,000 by getting businesses to sponsor a star on a Christmas tree dedicated to people who are homeless. With an estimated 5,000 people in Ireland homeless this Christmas, Focus Ireland is looking for the support of the business community to help tackle the social problem in Ireland.

Crowley, presenter of TV3’s Midday show, will switch on the Christmas tree lights at the top of Grafton Street at a ceremony on December 18. Focus Ireland is asking businesses to sponsor a star on the Focus Ireland tree in lieu of sending Christmas cards and corporate gifts to clients and customers. In Dublin alone, the charity reports to have seen a doubling of the number of families from eight to 16 every month in recent days.

Companies can sponsor a star ranging in price from €1,000 to €20,000. In return,the sponsor receives a special Focus Ireland etag, which can be input into their email. Sponsors’ logos will appear in full page ads in the Irish Independent and The Herald. Company names will also appear on the sponsor boards at the base of the Christmas tree on Grafton Street and will be seen by shoppers over the festive season.

Companies can sponsor a star by contacting Focus Ireland by email at christmastree@focusireland.ie