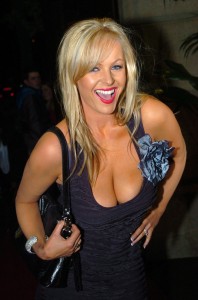 Following her less than auspicious and no doubt humbling singing debut on stage at Oxegen, Amanda Brunker has been confirmed by RTE as being among the line-up for the next series of Celebrity Bainisteoir.

The 37-year-old former model/Sunday World columnist/chicklit writer/actor/TV host and home furnishings and slimming product endorser will be part of the fourth series starting on RTE in September.

Finglas-reared Brunker will be in charge of Aughrim GAA club in Wicklow. Other well-known personalities taking to the sidelines for other local clubs include comedian PJ Gallagher, former model Gillian Quinn, ex-footballer and TV3 pundit Tony Cascarino, RTE’s Brenda O’Donoghue and Dana, aka Rosemary Scallan.

An official GAA tournament, the draw for the matches took place in Croke Park recently when GAA president Christy Cooney announced which teams and bainisteoiri would be playing against each other in the opening quarter final round. Over the coming weeks, the bainisteori will begin training their respective teams.

The clubs meeting each other in the first round will compete in a physical challenge which will see the winning club get home advantage. Celebrity Bainisteoir is co-produced by Animo TV and Kite Entertainment.