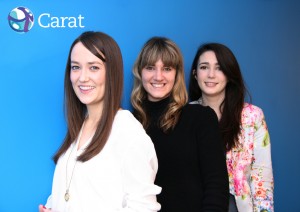 Carat Ireland has announced a number of new appointments.

The Dentsu-owned agency has promoted Áine Osborne to digital director. Since joining Carat in 2011, she has worked on various accounts, including Bank of Ireland, UPC and Kellogg’s. In her new role, one of her main responsibilities will be to work with the agency’s wider team to deliver a best in class digital planning output.

Caroline Mullen has been promoted to account manager. Having worked with Carat UK, she joined the team in Monkstown last year. Jenna Guy recently joined Carat as cccount manager from WPP’s MediaCom where she worked for three years on Coca-Cola, Dulux and Allianz. Her clients include Bank of Ireland and Glanbia.

Olivia Murphy will join Carat from Starcom next week to work on the Guinness account, which Carat has had since 2011. She spent three and a half years in Starcom, working on SuperValu, the wider Musgrave group, Valeo Foods, eFlow, Chartered Accountants Ireland, Ladbrokes and the Irish Greyhound Board.