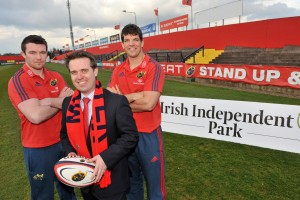 Musgrave Park in Cork is to be rebranded as Irish Independent Park in a naming rights sponsorship between the home of Munster Rugby and Independent News & Media. The deal comes into play next season and will run for 10 years. As part of the agreement, INM will have total and exclusive ground naming rights. It will have extensive branding at the ground’s entrance, on directional signage and in match day programmes.

The ‘Indo’ is now into its second season as Munster’s official partner. The paper features a weekly rugby pull-out exclusive to Munster. Musgrave Park is also home to the club’s commercial offices. Munster play Toulon at the Stade Velodrome in the semi-final of the Heineken Cup on Sunday, April 27. Geoff Lyons, marketing director, Independent Newspapers, is pictured with Munster’s Peter O’Mahony and Donncha O’Callaghan.