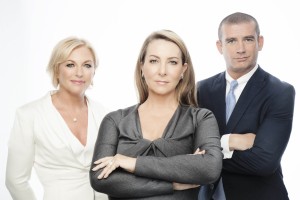 Following on from last week’s surprise double elimination, the cast of Celebrity Apprentice on TV3 get hot and heavy in this week’s task. Durex Ireland sets tonight’s task week and it revolves around their new product, Durex Embrace. Making sure not to spare the contestants any blushes, Embrace is made up of two sensual pleasure gels crafted with couples in mind. The teams have two days to come up with a publicity launch.

Team Athena consists of Daniella Moyes, Edele Lynch and Mikey Graham, while Team Iconic is Nick Leeson, Frances Black and Amanda Brunker. Lynch is project manager for Team Athena but she feels Graham doesn’t like taking orders from a woman. He soon quietens down when Lynch and Moyes try out the tingling gels.

The series is produced for TV3 by Larry Bass’s Screentime ShinAwil and sponsored by Hyundai.