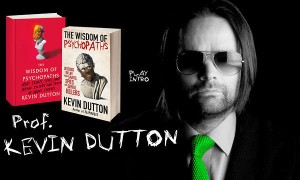 Chief executive is the career position most populated by psychos, a new book entitled The Wisdom of Psychopaths – What Saints, Spies and Serial Killers Can Teach Us About Success by Oxford psychologist Prof Kevin Dutton reveals. CEOs are risk-takers by nature and tend to be fearless, focused, confident, ego-driven, ruthless, insenstive and lacking in empathy. Dutton, whose book is based on the premise that there’s a scale of ‘madness’ along which we all sit, says ten per cent of all CEOs in Britain are psychopathic.

Functional psychos are not homicidal but they have similar ‘qualities’ to their murderous counterparts. They are charming, charismatic, persuasive and detached. They are cool under pressure and never lose sleep over ‘the little things’ many people would consider worth worrying about. Next up on Dundon’s psychos list are radio and TV presenters, surgeons, lawyers, political leaders, stock market traders, special forces troops and the clergy.

Dutton says only one per cent of the general public in Britain are clinically psychotic. Those least likely to have psychopathic tendencies include accountants, tradesmen and social workers. There are ‘method’ psychos, just as there are method actors. A paper produced two years ago showed that upper class members tend to have a hard time reading other people’s emotions and have less developed social skills.

But failing to connect with other people does not necessarily make an individual psychopathic, Psychology Today magazine claims and it is important to know that most people who are anti-social are not psychotic. Dutton, 45, is a loquacious Cockney and a natural-born story teller who could easily be mistaken for a stand-up comic. He says his father, who was a no-nonsense food trader, was a psycho. 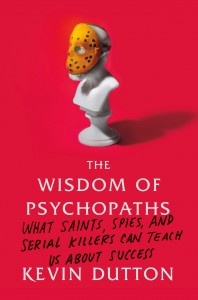 His book came from an earlier work on world-class con artists, a popularised version of his doctoral thesis. Even though his wife is a psychologist, his interest for probing humanity’s darker corners has sometimes unnerved her. He is pleasantly surprised by peoples’ fascination with psychopathy. He says if psychopathy is a spectrum, everyone is somewhere along it. Some business executives could hold their own against psychos locked up for murder in tests for egocentricity, persuasiveness, focus and lack of empathy.

They are often charming, confident, charismatic and make strong first impressions. They have great poise under pressure. They are also ruthless, remorseless and beyond shame or embarrassment. That makes them well-suited to many lucrative professions. A gang enforcer with a knife might share the same traits of focus and cold-bloodedness as a top surgeon. A predator with a talent for reading facial “micro-expression” and an apparent sixth sense for nervousness could, in another life, make an able customs officer.

In the worst cases, the headline-makers, or ‘hole-in-one psychopaths’, inhabit a moonless world of glacial emotional desolation. They show a lack of empathy, no conscience, a taste for violence  – often traced to trauma in childhood – and a fiendishly well-tuned radar for vulnerability. It turns them into serial killers like Jeffrey Dahmer and Ted Bundy. Dutton believes Sir Winston Churchill and Lord Byron were psychopathic.

Dutton says the big difference between psychopaths and the rest of the population is that psychos do not give a damn what their fellow citizens think of them and they will admit as much. There are times when even the most balanced among us has a sort of ‘psychopath envy’, circumstances under which we could enjoy the sort of licence that callousness bestows. For most of us, whether for fear of rejection or fear of failure, our foot is never far from the brake pedal. But a psycho has no brakes. The default position is ‘why the hell not?’