City Channel to be wound up 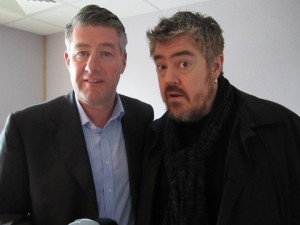 A liquidator is to be appointed to City Channel, the local channel for Dublin, Galway and Waterford, and a creditors meeting to wind up the company will be held soon. City Channel was founded by broadcaster David Harvey (pictured left, with British comedian Philip Jupitus), best known as presenter of Crimeline on RTE.

Harvey, who hosts a lunchtime phone-in show on Classic Hits 4FM, is City Channel’s biggest shareholder with 43 per cent. Liberty Global, UPC’s parent company, the cable service on which the channel is broadcast, has a 35 per cent stake. The two parties are said to be the biggest creditors, with combined loans of €750,000.

There was speculation in the media in recent weeks that City Channel may close. The decision to appoint a liquidator was taken after it became clear that the outlook for controlling mounting debts and winning advertising revenue was poor. The company had not made a profit since its launch six years ago.

Revenues peaked at €2 million but dropped to €750,000 recently. Plans to extend the concept to eastern Europe had to be dropped. City Channel introduced a number of broadcasting firsts, including a Polish-language show called Oto Polska presented by Izabela Chudzicka and a show targeted at the gay community.

Harvey was a deejay with Dublin pirate station Radio Nova, owned by Chris Chris Cary, in the early Eighties. He was a founder of Reelgood Productions and has been a shareholder in local station Country Mix, now Sunshine. He managed projects for Fianna Fáil while Albert Reynolds was party leader and taoiseach.

UPC plans to broadcast the channel as long as it is operating and may source a replacement for subscribers.