Colleran to take charge at Star 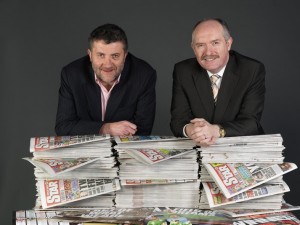 Irish Daily Star editor Ger Colleran (right) has been appointed managing director of Independent Star, the joint venture between Independent News & Media and Express Newspapers. Colleran replaces Paul Cooke (left), who said he is leaving to pursue “fresh challenges” but declined to go into any more detail just yet.

A native of Waterford, Cooke was a founding executive of Independent Star in 1988 when he joined as head of finance. He was appointed to the company board in 1994 as finance director and became managing director in 2001. He is the current chairman of the National Newspapers of Ireland (NNI).

A native of Mayo, who grew up in Clare, he was previously editor of the Kerryman. Colleran’s replacement has yet to be announced but it may go to someone from the Star, or INM. Contenders include Star news editor Michael O’Kane and Des Gibson, former editor of the Irish Daily Star on Sunday, which closed early this year.

Possible candidates at INM include Noirin Hegarty, editor of Independent.ie and Stephen Rae, editor of the Evening Herald. The changes at Independent Star come at a time when Express Newspapers surprised the market here by launching a trial run of selling its Daily Star tabloid with a blue masthead in the Republic.