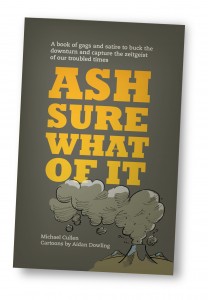 Sales of the new Irish comedy book Ash, Sure What Of It now exceed 3,000 copies. Launched in early October, the book by Michael Cullen is a collection of one-liners and short gags, illustrated throughout with cartoons. It is aimed at bucking the current economic downturn and humorously capturing the zeitgeist of our troubled times.

Ash, Sure What Of It (Gregmar Books; hardback price €6.99) features original cartoons by Aidan Dowling, whose work appears in the Phoenix, Marketing.ie and Private Eye magazines. The book pokes fun at the headline makers, including bankers, politicians, the clergy and celebrities.

“The strong demand for the book is due to the success of direct sales,” Cullen said. “The bulk of the 3,000 sales have come from businesses, online and at recent Christmas gift shows.” Gregmar Books had stands at the annual Dalkey Winter Fair and at the Xpose and Food & Wine shows in the RDS.

Cullen said only a modest number of sales have been made in book stores, so Nielsen BookScan data for the book is negligible. Irish publishers must compete for shelf space and media coverage with worldwide brands like Penguin, Hachette, Hodder & Stoughton, Century and HarperCollins.

Distributors Eason, Dubray and Argosy take up to 55 per cent commission and individual book stores 33 per cent. Argosy has failed to order any copies of Ash, Sure What Of It for its independent network. The book has been advertised in the national press and magazines, on FM104 and on outdoor. 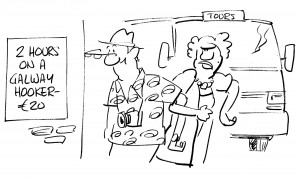 A 120-page hardback, Ash, Sure What Of It was designed by Jamie Helly of Dynamo.  Some gags from the book: “How does Neven Maguire prepare his chickens? He just tells them straight out they’re going to die”… “Fox hunting would be a great sport, if only the fox had a gun”… “Maeve Binchy has given more pleasure in bed than any woman”.

An ideal stocking filler for Christmas, to order your copy of Ash, Sure What of It click on http://ashsurewhatofit.com/