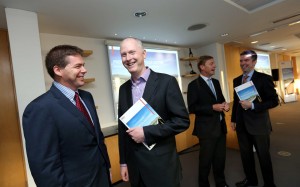 Core Media has emerged as the best workplace in Ireland for medium-sized organisations/companies in the Great Place to Work 2014 listings. Last year, Core came third in the medium (101 to 300 employees) category and group boss Alan Cox was voted most trusted business leader. The criteria for the best places to work includes employee trust in management, pride in the work they do and enjoying a high level of camaraderie.

The rules for management are likewise but with the added element of achieving goals with people who give their personal best and work together as a team, in an environment of trust. Among the other companies Core out-performed were Mars Ireland, ranked second; Morgan McKinley (5th), MasterCard Ireland (9th) and VW Group (15th). Among the small workplaces (20 to 100 employees), digital agency CKSK was ranked fifth.

This year’s most trusted leader is Paypal vice-president of global operations Louise Phelan.

Particular attention is paid to leaders who build trust in all levels of the business through openness, transparency and honesty. Last year, the judges said Cox showed strong leadership in delivering on promises and navigating and communicating a clear vision for Core. There were a number of comments from the agency group’s employees about the positive impact Cox has had on their workplace experience.