Coca-Cola HBC Ireland this week launches a €600,000 campaign for DeepRiverRock water. Created by McCann Dublin, the push is designed to boost sales and brand preference. Nielsen figures show the brand to be the number one selling water on the island of Ireland. The TV work was produced by Red Rage Films and directed by Lena Beug. The TV commercials were shot on location in Bray and Stillorgan.

Mindshare handles the media and Zoo Digital worked on the online elements. The campaign launches with three 20-second spots on RTE, UTV, TV3, Channel 4 and Sky, along with in-store POS and digital. McCann’s strategic planner Sean Whitaker said water is vital for the mind to function properly. If people get dehydrated it affects their concentration levels and this sparked the line, ‘’When you can’t think straight, hydrate’’. 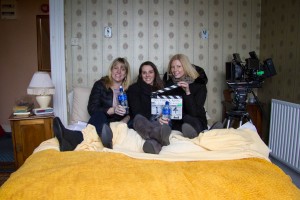 Deep RiverRock’s Alina Uí Chaollaí said the campaign is a full 360 idea which works across TV, in-store and on-line. She said the push is a major investment to exploit the brand’s potential on an all-island basis. Pictured on the shoot are Coca-Cola HBC Ireland’s Tara O’Rourke, Roseann McEntee and Alina Ui Chaollai.