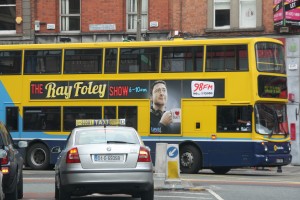 98FM has a new campaign to drive the music station’s anchor shows, The Ray Foley Show and Dermot & Dave. Both shows will be promoted throughout Dublin in the coming months. The €500,000 campaign aims to increase awareness of the broadcasters as 98FM presenters and their already familiar TV personalities. The ads run on 48 sheets, six sheets, T-sides, super sides, Dart cards, super rears and lower rears.

Cliona Hayes, marketing director, 98FM, said many people are familiar with the presenters from their TV shows, particularly Ray Foley who presents the Take Me Out dating show on TV3 and Dermot Whelan on RTE’s Republic of Telly. The ads aim is to ensure listeners make the link between the on-air presenters and their TV shows. “The Ray Foley Show is new to 98FM and while we are getting a great reaction from listeners, the new campaign will ensure more visibility around Ray and Dermot being a key part of 98FM,” Hayes said.