Diabetes body hopes to coin it 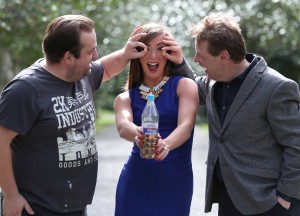 Comedian Karl Spain, Today FM’s Ian Dempsey and stylist Naomi Clarke, who are among almost 190,000 adults in Ireland with diabetes, helped launch a fundraising initiative. As the digits 1 and 2 are numbers synonymous with the condition, collecting 1c and 2c coins and donate them to Diabetes Ireland makes sense. Calls for the coins to be withdrawn from circulation have been made on the back of a trial in Wexford.

Diabetes Ireland is hoping its new initiative is successful before the coins disappear. The organisation estimates that if everyone in Ireland who has diabetes decided to fill a one litre bottle with the 1c and 2c coins, it could raise up to €3.4 million a year. Diabetes is a condition where glucose in the blood is too high.

Type 1 diabetes is due to a major lack of insulin, a hormone produced in the pancreas which enables glucose in the blood to enter the cells for energy use. Type 1 is managed with diet and exercise and multiple daily insulin injections. In Type 2 diabetes, there is a lack of insulin or insulin resistance.

Type 2 can be managed with diet, exercise, tablets and even insulin injections. Long-term, poorly controlled diabetes can damage the eyes, kidneys and heart. For more information visit www.diabetes.ie.