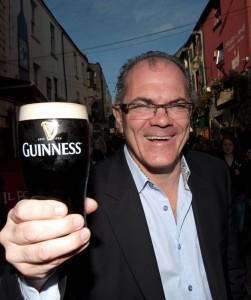 Diageo Ireland is taking delivery of ten new giant vessels capable of brewing 40 million pints of stout and beer each week for home and export markets. The first of 27 vessels in all, each 85ft in length and weighing up to 28 tonnes, arrived in Dun Laoghaire harbour on Sunday evening after being shipped from Menen in Belgium via Rotterdam in Holland. Once erected, the biggest of the vessels will hold just under one million pints.

The arrival of the brewing vessels is part of a €153 million expansion and redevelopment of the St James’s Gate Brewery. Project construction started last summer and the plant will start producing beer in June. The vessels are being unloaded by crane at the old Carlisle Pier in Dun Laoghaire until they are transported in convoy to St James’s Gate in the early hours of February 27, when the amount of traffic is at its lightest.

The rest of the vessels will be delivered by early March. The convoy will measure 300 metres long and will move at an average speed of four to six kilometres an hour. Paul Armstrong of Diageo says the new state-of-the art brewing plant will minimise energy consumption and reduce environmental impact. It will save an Olympic swimming pool of water every 30 hours and will save enough energy each year to power 1,200 Irish homes.