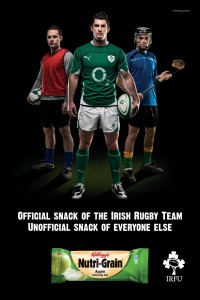 The Dublin office of the international Leo Burnett network has been put into liquidation, a statement issued on behalf of Eastbrook Services, trading as Leo Burnett Associates (Dublin), has confirmed. Employees and clients were informed of the news yesterday and a creditors meeting and a liquidator is expected to be appointed in early March after which the company’s operations will be “wound up in an orderly manner”.

The media statement made no reference to the agency’s finances, but it is known that the business was under severe pressure in recent months. Accounts filed for 2011 show a loss of €64,305, compared to a pretax profit of €277,805 for the previous year. Burnett’s major client was Kellogg’s and among its high-profile campaigns was its Nutri-Grain work with rugby’s Rob Kearney. Other clients included Airtricity, Crisis Pregnancy Agency, Nivea, RTE Guide, Sharptext and the C&C-acquired Gleesons’ Tipperary, Finches and Bavaria drinks brands.

The agency recently won Irish Pride bread. Advertising veteran Martin Larkin joined Burnetts in 2009 as executive chairman and consultant, following the closure of The Larkin Partnership. He brought with him the GAA, Nissan, Pennys/Primark and the Irish Daily Star. But the agency lost the GAA/Croke Park to Target McConnells following a review, while Nissan moved to Boys and Girls last August without a pitch.

Shane McGonigle resigned as the agency’s managing director last year to pursue other interests, which came as a surprise to many people in adland. He was replaced by Keith Murray, a former director of Language. The agency’s creative director was Eoghan Nolan, widely regarded as one of  Ireland’s most gifted copywriters. Leo Burnett Worldwide, to which the Dublin office is aligned, is part of the French-owned Groupe Publicis.

Leo Burnett’s media buying and planning in Ireland is mainly handled by Starcom.