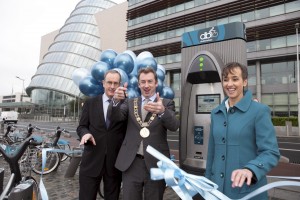 The North Wall Quay station has 40 bike stands. A new station at Deverell Place, off Gardiner St, has also opened along with an extension to the Talbot St station. These are the first of 58 new bike stations to open between now and next July. An extra 50 bikes are available and eight new stations will open before Christmas.

The opening is part of a €35m expansion which sees the bike network increase to 102 stations and 1,500 bikes by next July. The Deverell Place Station has 30 stands and an extra 20 stands have been added to Talbot St, bringing its capacity to 40. Extra bikes will be introduced in batches as new stations open.