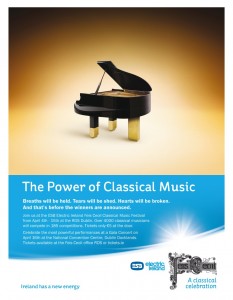 Irish International won the NNI Press Ad of the Month for March for its ESB Electric Ireland Feis Ceoil classical music festival. Art directed by Paddy Geraghty, the ad features an upturned three-pronged plug in the shape of a grand piano, while the copy by Bernie Martin highlights the “power of classical music”.

The ad was chosen by Bloom’s David Quinn, Debbie Kiely, Mediacom and Brand Artillery’s Eoghan Nolan. Quinn said he liked the juxtaposition of classical music and electricity as the two elements combine to create a striking visual. Nolan said he was impressed with the ad’s novel and intriguing graphic.

Media planning and buying for Feis Ceoil was by Helen O’Rourke of MediaVest.

The ad qualifies for the 2011 awards, along with March runners-up ‘Toasted’ by Owens DDB /Mediaworks for Johnston Mooney & O’Brien; ‘Rose’ by Rothco/MediaVest for O2; ‘Baby Gorilla’ by Publicis QMP/OMD for Cadbury and ‘Smartphone Circular Fireplace’ by DDFH&B-JWT/Carat for Nokia.

The NNI competition for May is open for entries until June 13.