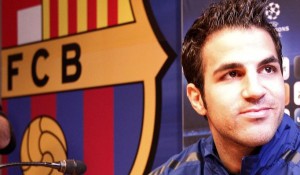 Cesc Fabregas will sign for FC Barcelona today after completing a medical. Barcelona and Arsenal are understood to have agreed an initial £25 million deal, with various add-ons bringing it to €35m in all. Arsenal manager Arsene Wenger said he regretted losing the Spanish midfielder but conceded that Fabregas,24, was set on rejoining his boyhood club. He will sign a contract which should see him stay at Camp Nou for five years.

With strong indications that Arsenal midfielder Sami Nasri is set to move to Manchester City for about £24m, Wenger is coming under increasing pressure from club fans to strengthen his squad before the transfer window closes at the end of August. With Fabregas gone and Nasri due to depart, resulting in about £50m in transfer fees, Arsenal may buy at least one proven midfielder, a central defender and a goalkeeper.

Wenger told media at the weekend: “We’re all replaceable. All the cemeteries are full of replaceable people.” Arsenal play Italian club Udinese at the Emirates tomorrow night in the first leg of the Champions League qualifiers. The game will be shown live on TV3 and Sky Sports. Meanwhile, Republic of Ireland striker Robbie Keane is expected to sign for LA Galaxy from Tottenham Hotspur today for a fee thought to be €3.4m.