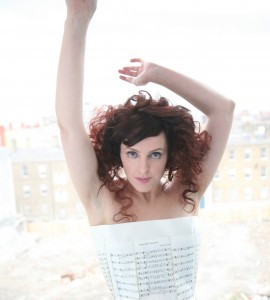 Julie Feeney, widely known for her hit single Impossibly Beautiful, will headline the ESB Live 2010 at the National Concert Hall in Dublin on Saturday, May 29. The Galway singer will perform a theatrical show with a live orchestra as part of the ESB-sponsorship of Irish acts at the Earlsfort Terrace venue.

Last year saw the release of her second album, Pages, where she sang, composed and produced all the songs and conducted the Irish Chamber Orchestra. She designed the album artwork, showing her hand-stitched ‘pages’ dress sculpted from the pages of the album’s orchestral score.

It also includes a tree house which she had painted in specific colours reflecting the album’s tone. The Impossibly Beautiful video features 18 different head dresses designed by Piers Atkinson. The track is used in the VHI One Plan advertising campaign created by Publicis QMP.

Feeney’s first album, called 13 Songs, was released in 2005 and sold over 15,000 copies in Ireland where it won the Choice Music Prize, securing her a deal with Sony-BMG on the now defunct Red Ink label.