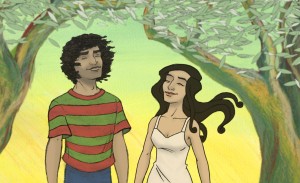 Kavaleer Productions’ short animated film Hasan Everywhere has been nominated for an award at this year’s Brooklyn Film Festival. The film, scripted and directed by Andrew Kavanagh and produced by Ciara Gillan, was selected from over 2,400 films submitted from 92 countries worldwide.

The film won two Digital Media awards in February and received an Irish Film and Television Award (IFTA) nomination in January. Based on the friendship between an Israeli novelist and Palestinian artist Hasan Everywhere, depicts love and friendship across the Semitic divide.