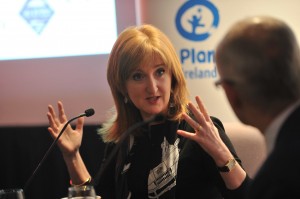 Pooling newsrooms resources to cut costs and make news gathering more streamlined is an option for Irish media in the recession, Communicorp chairperson and Independent News & Media (INM) non-executive director Lucy Gaffney has said. Speaking at a breakfast organised by Plan Ireland, Gaffney said news organisations in the UK had implemented similar practices as have Communicorp’s Today FM and Newstalk.

Gaffney said Digicel had advanced to the next stage of the bidding process for a mobile phone licence in Burma. Digicel is now one of 12 applicants in the final tender round. They will submit their next proposal by June 3, with a decision due later that month. Denis O’Brien’s mobile group, which operates widely in the Caribbean region, is monitoring the Cuban mobile licence market for possible developments.

Other issues which Gaffney spoke about included her experience working with Esat while bidding for the mobile phone licence in Ireland. She recalled how their office windows were blacked out and the room swept for listening devices every morning. “Like all entrepreneurs, Denis is completely and utterly paranoid,” Gaffney said. She is totally opposed to gender quotas as she regards them as demeaning to women.

Gaffney began her career as a secretary in Bell Advertising and spent six years with the agency, latterly in client service.  She moved to the Irish Press group to look after promotions and advertising. In 1989, O’Brien recruited her as sales and marketing boss for Dublin’s new music station, 98FM. After six years she left to set up her own agency, The Ideas Company. She wound down the business to rejoin O’Brien as Esat marketing director.