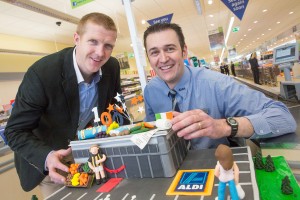 More Irish consumers are now shopping at Aldi or Lidl than at any of Ireland’s ‘big three’ grocers, Tesco, Dunnes Stores and SuperValu, a Behaviour & Attitudes study for Checkout magazine shows. The survey of 662 Irish shoppers found that a total of 62 per cent have shopped in either Aldi or Lidl over the past year, compared with 48 per cent that shopped in Tesco, 41 per cent in SuperValu and 36 per pent in Dunnes.

The study showed 92 per cent of respondents say they have a Lidl in their local area and 86 per cent have an Aldi, indicating the near-nationwide geographical spread of both retailers. The study also found that overall weekly grocery spend has seen its first increase in six years, with weekly spend increasing by six points, bringing spending back to 2010 levels. In terms of the supermarkets that have gained the most out of this increase in spend, Dunnes has seen a 12 point rise in spend since last year.

The average value of a ‘main shop’ in Dunnes is now €125, up from €113 last year. Average spend at SuperValu is up seven per cent to €122, while average spend at Tesco is up three points to €125. Average spend at Aldi/Lidl is up four percent to €118.  The survey was carried out at 63 sampling points across the country last November. The Checkout conference is in the Four Seasons Hotel on January 28.