Just over half of Irish shoppers plan to reduce their Christmas spend this year with one in ten waiting to see what happens in the Budget, a report by Axa Financial indicates. Some 51 per cent will spend less shopping over the festive season, while just one per cent say they intend to buy more gifts in the coming weeks. 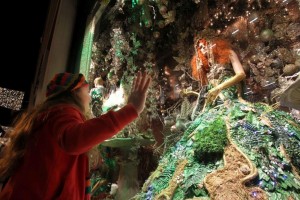 Festive mood: A youngster marvels at the Brown Thomas Christmas window in Grafton Street in Dublin

Consumers aged 35-44 are most likely to spend less with 55 per cent confirming this. Looking ahead, 23 per cent of of the 1,000 adults surveyed said their discretionary spending on areas like holidays, entertainment, home improvement and electrical goods rests on what happens in the Budget.

When it comes to standard of living over the next six months, 59 per cent expect a decline and 17 per cent said it will depend on the Budget. People over 65 are the most pessimistic, with 76 per cent predicting as fall in living standards. The survey was conduced by iReach in recent weeks.