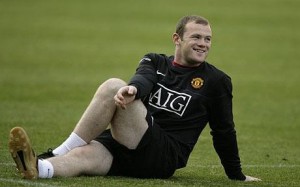 Setanta Ireland will become the first Irish channel to broadcast in high definition when it shows the Manchester United Premier League game against Blackburn live from Old Trafford at 3pm this Saturday. It will be followed by the second round of the FA Cup, Wales versus New Zealand rugby and Juventus against Fiorentina.

Manchester United striker Wayne Rooney (above) has apologised to club fans for his behaviour in demanding a transfer. He denied having any interest in joining Manchester City.