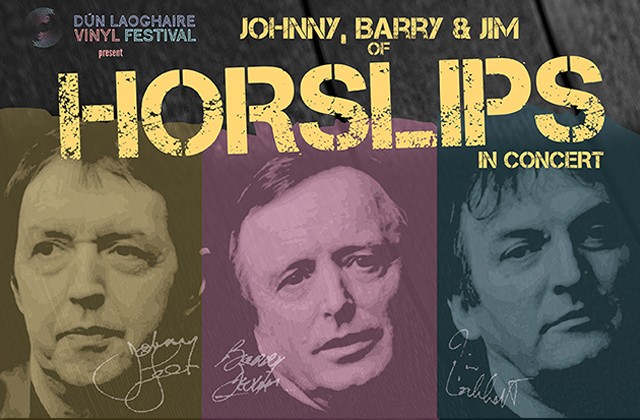 Two of Horslips’ top albums, ‘The Táin’ and ‘Book of Invasions’, are being re-issued on vinyl as part of their gigs at the Dún Laoghaire Vinyl Festival this weekend. The release is limited to 1,000 copies of each album and will be sold at the two shows in the Pavilion Theatre, 43 years on from recording their ‘Horslips Live’ album in Dún Laoghaire’s old Pavilion.

Eamon Carr or Charles O’Connor will not be performing at the gigs.

1976’s ‘Book of Invasions’ is a concept album based on stories from Irish mythology and included such tracks as, ‘The Power and the Glory’, ‘Sideways to the Sun’ and the classic, ‘Trouble (with a Capital T)’. The concept album idea was first mooted by the band with 1973’s ‘The Táin’ which dealt with the ancient war between Ulster and Connacht.

The war’s two main protagonists were Queen Maeve and Cúchulainn.

‘Dearg Doom’ was probably the most famous track to come out of this album but it also had some extraordinary supporting songs such as ‘Ferdia’s Song’ and ‘Faster than the Hound’. Taking place over three days from this Friday, the Vinyl Festival also involves a collection of talks and discussions relating to all aspects of vinyl recordings.

Issue covered include writing, recording, producing and performing, down to examining sleeve design and liner notes, as well as looking at the cultural importance of vinyl records. The festival takes place in  venues around Dún Laoghaire, including the Lexicon Library Studio, National Maritime Museum, The Pavilion Theatre and The Lighthouse.

Other events include Newstalk’s Tom Dunne playing tracks from the Beatles’ ‘Abbey Road’ album and discussing its recording and legacy as it celebrates its 50th birthday, plus Liam O Maonlaí talking about the Hothouse Flowers’ debut album, ‘People’, playing some of the tracks on vinyl and performing live on piano.

Link to Horslips at the Pavilion:  https://www.paviliontheatre.ie/events/view/horslips

Tickets for the Vinyl Festival start at €10 and can be booked on https://www.vinylfestival.ie/