The Independent Broadcasters of Ireland (IBI) and RTÉ Radio have jointly launched Radio Gauge, a tool for media buyers and advertisers to measure advertising effectiveness and the impact of creativity on a campaign’s success. The service was developed by RTÉ Radio, the IBI and a number of ad agencies. 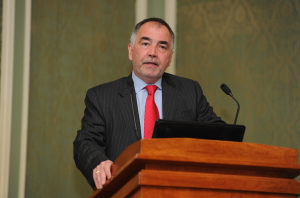 Scott Williams, who chairs the IBI, said Radio Gauge involves a €100,000 investment and is possibly the most significant collaboration between independent broadcasters and RTÉ.  The service will not only help advertisers measure campaign effectiveness but will also help promote understanding of radio creativity.

Antony Whittall, commercial director, RTÉ Radio, said Radio Gauge should be welcomed by advertisers and media buyers under pressure to show value for money. Radio Gauge has been operating in the UK for the past five years. In 2010, it was credited by the Radio Advertising Bureau with increasing radio advertising spend for the first time in four years. It is used in South Africa, Germany and Canada and is being piloted in Finland.