The Institute of Creative Advertising & Design (ICAD) is to pay tribute to adman and screenwriter Johnny Ferguson who died last year from cancer at the age of 50. In memory of their former president, ICAD will stage a show of 14 short films entitled Creative Shorts III at 7pm in the Sugar Club on Thursday, January 30. Themed Shorter is Better, bookings can be made by contacting http://icad.ie/, or by paying €10 at the door.

The following appreciation by Eoghan Nolan was published in Marketing.ie magazine last May. 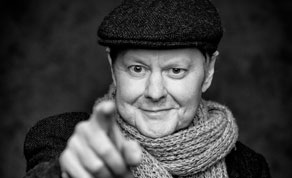 The passing of a remarkable man

Much-loved screenwriter and copywriter Johnnny Ferguson has died in Dublin after a short illness, at the age of 50. Ink, commerce and art were in Johnny’s blood from his father Vincent, a leading businessman, director of Independent Newspapers and major art collector. Always a keen musician, he was in a variety of bands, some as good as their names; Thunderbirds Are Go!,9 out of 10 Cats, The Toblerones and the Ex-Boyfriends.

After studying French in UCD, he worked as a journalist in London before returning to Ireland as a copywriter. Rapidly becoming one of Ireland’s top freelance writers, he was a stalwart of Dimension and of Cawley Nea from the time of their start-up. His input was intrinsic to the early days of several other agencies. Anarchic and irreverent, he practised disruption long before it became a by-word of polite boardrooms. He understood innately that if an ad doesn’t get noticed, it isn’t an ad.

Among his many achievements was being part of the team that won Ireland’s first ever D&AD and serving as ICAD president in 1996. Always looking for new challenges, he became a screenwriter, enjoying success with Gangster No.1and Fallout.  Several original scripts and adaptations of two novels of Sebastian Barry are still lined up for production.

Like all good admen should, and some do, he channeled the zeitgeist; he was a man of the social age. He lived ‘connectedness’ before the term was coined and nothing delighted him more than bringing people together and helping to forge new friendships. (Not surprisingly, he was an early Facebooker and 1,000 friends will miss his posts.)

Together in the 90s, we organized 35 Copywriters Out to Lunch, an event that led to 43 Copywriters Out to Lunch a year on. He looked to the future with solid old-world values of loyalty, courtesy and respect and had a great ability to see the best in people, so many of whom he counselled and encouraged. No hare-brained scheme or wild endeavour would fail to receive a thumbs-up from him – complete with insightful pointers – and people left his company with lighter hearts and brows unfurrowed.

Johnny’s funeral was the final demonstration of what a human Venn diagram he was; bringing together copywriters, art directors, designers, CDs, AEs and MDs, Oscar-winning filmmakers, artists, gallerists, novelists, merchants, marketers, entrepreneurs, impresarios, musicians, actors, playwrights, producers, editors and sound engineers, comedians, designers, journalists, brand-owners and those between jobs. (There may even have been a candlestick-maker present). People from all walks of life, some linked to Dublin only by this one soul, gathered to salute a generous and creative man whose kindness and wit will be much missed.

Aside from this myriad of friends, he is survived by a wide and loving family, including his mother Noeleen and his beloved Ali Joy White, married a week before his demise, one deadline he was determined not to miss. We have lost the brightest feather in our wing – Eoghan Nolan