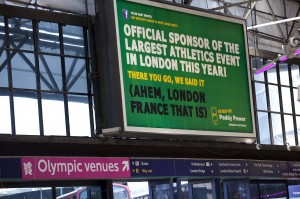 Experiential and out of home campaigns agency Mixtape Marketing has been awarded a gold MAA Worldwide Globe award. The awards celebrate the ‘best of the best’ marketing campaigns from around the world. The gold was awarded for Paddy Power’s London France campaign. Mixtape sourced a small town in Burgundy called London and staged a Paddy Power sponsored prank to rival the official Olympics in England.

As the summer Olympics drew closer, the public sentiment towards LOCOG, the official organising committee, was rock bottom.  Backed by legislation, LOCOG was fervent in its protection of the Games’ official sponsors. A week before the Olympics, billboards went up in London tube stations claiming that Paddy Power was “Official sponsors of the largest athletics event in London this year (Ahem, London, France that is)”.

LOCOG demanded that the media owners take the billboards down. Paddy Power responded with a threat of High Court action, forcing LOCOG to back down and allowing the billboards to remain in situ. The challenge prompted a flurry of media attention online and offline. Paddy Power trended on twitter on the day of the High Court action. There was also social media, online commentary and offline articles worldwide.

The largest event that London, France had ever seen was a good old-fashioned egg and spoon race in August that summer. A dozen locals turned up for the event from all over London, France. They came on tractors and bicycles to witness the event and to take part in the contest to challenge for a gold medal and a €100 prize.

The MAA Worldwide Globe awards recognise the ‘best of the best’ in international marketing work. Over 120 judges from 15 countries, representing agencies, clients, academia, media and industry associations reviewed over 300 campaigns from 25 countries. There were 74 awards in 25 categories presented.

Mixtape’s Neil Devlin said he was glad the judges enjoyed “the devilment” of the Paddy Power campaign.