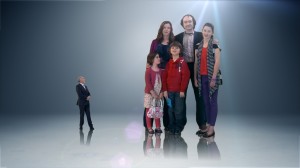 Associated Newspapers Ireland has launched a TV campaign for the Irish Daily Mail with the lead ad placing an emphasis on the family. The new ad broke this week on TG4. The idea is to convey a message to consumers that the Irish Daily Mail speaks on behalf of its readers by giving them a voice.

Directed by Steve O’Reilly and filmed in De Studio in Clonskeagh, post production was handled by Tangerine in Ranelagh and audio by Graham Bolger in Soundtrack. The voiceover artist was Dublin actress Shona Weymes.

Three other ads were produced by M&C Saatchi in London. They focus on the paper’s content,  particularly Good Health on a Tuesday, Femail on a Thursday and You magazine every Saturday.

Niamh Nic Liam, marketing manager, Irish Daily Mail, said the campaign will run for the next year on both terrestrial and satellite stations. Mindshare is handling the media buying.