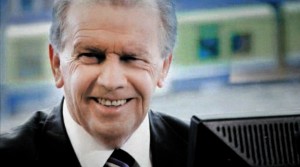 In his column in today’s Evening Herald, John Giles writes about cheaters who must be brought to book. He highlights the wrongs of  footballers who dive to cheat and get decisions when they are obviously guilty of making a farce of  the beautiful game. Giles singles out Arsenal manager Arsene Wenger for specific criticism and accuses the French man of being blind to the sins of his club’s Spanish midfielder Santi Cazorla.

In the game against West Brom at the weekend, Cazorla dived to get a penalty, there’s no question about that. What he did was wrong and bad for the game. When any footballer, who youngsters emulate, dives, it’s wrong – undoubtedly so and he should be punished with at least a  two-match ban. The penalty should apply to all Premier League players found to do likewise, whether it be Gareth Bale, Ashley Young or Luis Suarez.

Giles kicks off his column by drawing a comparison between Wenger’s reaction to Cazorla’s dive to “the disgraceful crowd scenes” at the Etihad Stadium during the Manchester derby at the weekend. How daft is that. Giles says the Premier League has become a playground for “cheats and con artists”.  He’s not wrong . But the former Leeds maestro should know better than to draw comparisons with fans’ loutish behaviour.

Giles says the connection between a player diving and a thug throwing a coin at Rio Ferdinand is “very simple”. Fans think that if players dive to get a penalty they can do as they wish on the terraces. Frankly, the comparison is nonsense. Firing a coin – or multiple coins – at a player is an act of wanton violence which has far-reaching and serious implications for football, while diving is a gross insult against fair play in sport.

For someone of Giles’s standing in the game to suggest Wenger should shoulder some of the responsibility for the disgraceful crowd scenes at the Etihad on Sunday is disingenuous at best, but, more accurately, is irresponsible. All Premier League managers must condemn diving and collectively agree to retrospective penalties against the perpetrators. Let’s stick to the issue and not deflect the ball elsewhere.