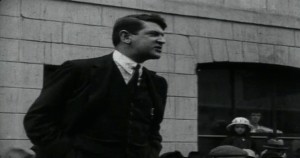 Johnston Mooney & O’Brien is sponsoring TV3’s new Thursday night series Temple Street Children’s Hospital. The show takes viewers inside the doors of Temple Street Children’s University Hospital to meet the medical teams, the families and the young patients. Throughout the 12 episodes, viewers get a chance to know some of the patients and their families and experience the medical and emotional journeys at the hospital.

In March last year, Johnston Mooney & O’Brien launched a new TV ad created by Owens DDB. It featured iconic and everyday images through Irish history. The use of Michael Collins (above) in the ad prompted people to phone Liveline and complain to Joe Duffy. A specially written song, ‘When the world was yours and mine’, was written by Adrian Cosgrove, Billy Larkin and Kevin Breathnach and sung by Mark Kilbride.

Consumers asked where they could download the track, so Johnston Mooney & O’Brien decided to make it available to download on iTunes, with all proceeds going to Temple Street. The sponsorship stings will drive awareness of the fundraiser while also allowing viewers to get involved by supporting Temple Street. The Johnston Mooney & O’Brien deal was brokered between TV3 and Mediaworks.