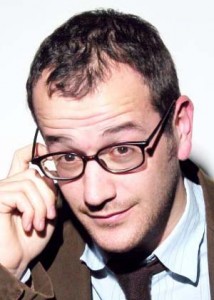 Josh Howie is the headline act at the Laughter Lounge comedy venue in Dublin from January 27th-29th. Howie is the son of PR doyenne Lynne Franks, who was the inspiration for Joanna Lumley’s Patsy character in the BBC sitcom Absolutely Fabulous.

Howie is an ex-public schoolboy, raised as a Buddhist who trained as a rabbi but was kicked off the programme for being caught with a naked (non-Jewish) lady, so perhaps it was inevitable that he would go on to become a stand-up comedian.

He integrated these stories into his debut solo Fringe stand up show, entitled Chosen, at the 2008 Edinburgh Festival. He has also been filmed for the Paramount Comedy shows Comedy Store, World Stands Up and Comedy Blue.

He currently presents Movie Geek, the Sky Movies cinema show. Often praised for his writing talent, he is a regular contributor to The Guardian and is a columnist for Sky Movies magazine.

At the age of 24, he was the youngest ever person to be appointed as head of video in the London office of Partisan, working with Armand Van Helden, Fatboy Slim and Placebo. He then realised it was time to settle down and get a proper job – being a stand up.