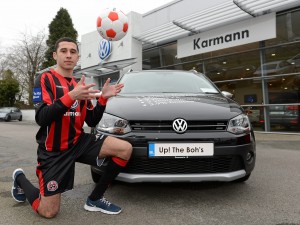 Bohemian Football Club has a new sponsor for the coming season in the shape of Karmann Volkswagen, the Dublin car dealership located on the junction of the N3 and M50. The VW dealership opened its doors in April of last year, serving local communities in and around Castleknock and Blanchardstown. To mark the deal, Karmann has announced a ‘kids go free’ promotion, allowing one paying adult bring up to three kids under 14 to any Boh’s home game at Dalymount Park. Pictured is Bohemian’s 20-year old defender Roberto Lopez.