Dublin music station Spin 1038 has been nominated for most innovative international radio station at the Worldwide Radio Summit Awards being staged in Los Angeles at the start of May. The event is described as the yearly gathering of “the most forward thinking minds in radio, digital/social and music.” Spin 1038 is up against some big players in the radio industry, most notably BBC Radio 1 in the UK.

Chief executive Jamie Crawford says stations cannot nominate themselves for the award so it is a recognition from peers in the music and radio industry across the world. In the past year, Spin’s prime time market share in Dublin grew by 40 per cent. The station, which is part of Denis O’Brien’s Communicorp, is the top medium on Facebook in Ireland with over 174,000 likes to their page. It has 100,000 followers on Twitter. 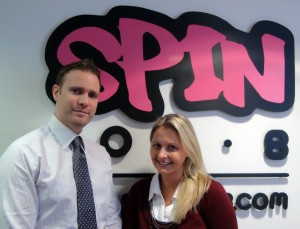 Last month Spin 1038.com received a million page impressions and the station iPhone app has over 168,000 downloads. The third annual Worldwide Radio Summit will be held in the Roosevelt Hotel in Hollywood from May 2-4. Pictured above are Jamie Crawford, chief executive and Cliona Hayes, marketing director, Spin 1038.