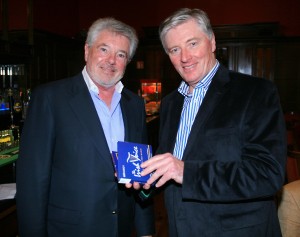 RTÉ has confirmed that broadcaster Pat Kenny will not be renewing his contract with RTÉ and is leaving the station to join Newstalk 106-108FM. Kenny (pictured above right, with John McColgan), will host a news and current affairs show from 10am to 12.30pm weekdays from September 2. Kenny joined RTÉ as a part-time radio announcer in 1972 and soon moved into presenting news and current affairs programmes.

He presented Today Tonight, winning  a Jacob’s award in 1986 for his three radio programmes: Saturday View, The Kenny Report and The Outside Track. After the 1988 Eurovision Song Contest, which he co-hosted with former Miss Ireland Michelle Rocca, he presented the Kenny Live chat show. He took over as host for the Late Late Show from Gay Byrne in 1999, which he continued to present for the next 10 years.

In 2009, he returned to current affairs, presenting The Frontline, moving last January as one of a team hosting Prime Time. Kenny has presented his Today with Pat Kenny show on RTE Radio 1 since the 1980s and has won many industry awards across his career. RTÉ director general Noel Curran paid tribute to Kenny and said he made “a huge contribution” to RTÉ over 41 years, both on television and radio.