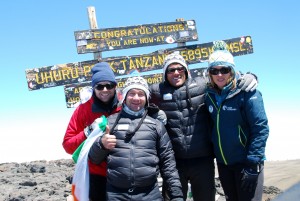 A documentary following eight Irish TV personalities as they undertake the considerable challenge of reaching the top of Kilimanjaro in aid of Our Lady’s Children’s Hospital Crumlin will air on RTE 1 next Monday. Narrated by actor Colin Farrell, The Climb for Kids – Mount Kilimanjaro Challenge follows Síle Seoige, Kathryn Thomas, Alan Shortt, Jenny Buckley, Darren Holden, Karl Spain, Ruth Scott and Paul Byrne as they take on this emotional and gruelling trek to raise much needed funds for Ireland’s sick children.

Standing at 19,340 ft above sea level, Mt Kilimanjaro is the tallest mountain in Africa and the world’s highest free standing mountain. Biting winds, altitude sickness and sub-zero temperatures were among the challenges the climbers faced to reach the summit and for many it proved to be an emotional journey of self discovery. Síle Seoige said that when she accepted the challenge she knew it was going to be tough but nothing quite prepares anyone for the enormity of it until you actually do it.

“For me, the climb was a life enhancing experience and one that will stay with me forever,” Seoige added. “While it was definitely the toughest thing I’ve ever done, it was only a few days out of my life and nothing compared to what the kids and their families go through day in day out in Crumlin hospital. They were the ones to give us the motivation to keep going.” Produced and directed by Michael Sheridan, a noted motoring correspondent, the documentary was edited by Tangerine Productions.

The Climb for Kids – Mount Kilimanjaro Challenge will be shown on RTE 1 at 9.30pm next Monday, July 18th.