News of the World readers relaxed about hacking allegations 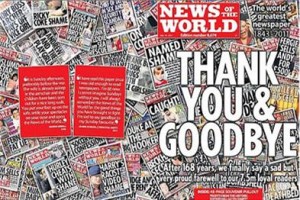 News of the World readers in the UK feel least strongly about the phone-hacking allegations made against the newspaper, raising questions about how toxic the brand was in the eyes of its 7.4 million readership, a OnePoll survey by the UK Marketing magazine reports. In interviews with 1,000 people, just 34 per cent of readers were aware of the story and “cared very much”, while 27 per cent “strongly agreed” that advertisers should pull ads.

This compared with 75 per cent caring very much and 76 per cent strong agreement from Observer readers. NotW had the highest proportion of Sunday paper readers who cared only “slightly”, at 42 per cent, while a fifth said they “did not care” about the scandal. After the announcement that the 168-year-old paper was closing down, Renault said it would not advertise in any News International title in the “immediate future”.

Speaking at a Marketing session at the Brand Republic forum in London yesterday, Innocent marketing director Thomas Delabriere argued that Renault was “overreacting”. Yesterday the Sun claimed its sister paper had topped four million copies and eBayers were offering up to £30 for a final edition of the NotW.

The National Federation of Retail Newsagents (NFRN) estimated NotW sales at between somewhere between 3.5 and four million. The figure is based on a sample. News International printed around four million copies, one million more than its regular print run. More accurate sales figures are due out this week.

The decision by News Corp to axe the NotW could mean that 22 staff in Dublin will lose their jobs. Of the Irish-owned newspapers, Sunday World looks as though it stands to gain most from the closure. NotW in Ireland made headlines by using former Taoiseach Bertie Ahern in TV ads. Crime reporter Paul Williams, whose departure from the Sunday World caused some disquiet, also featured in poster campaigns for the NotW.