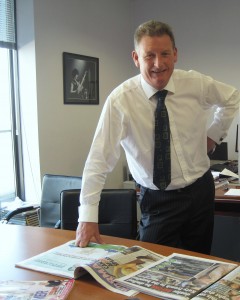 Sunday World boss Gerry Lennon is taking over as managing director of the Irish Daily Star under a new arrangement agreed between the Independent Star’s two shareholders, Independent News & Media (INM) and Northern & Shell in the UK. INM is to assume full executive responsibility for running the daily red top. As part of the new plans, the Star will relocate from Dundrum to Independent House on Talbot Street, where it will operate alongside other INM group titles. The relocation is due to occur on a phased basis by mid-year.

In statement today, INM says Ger Colleran will step down as Independent Star managing director to return to his former role as the paper’s editor. The changes occur with immediate effect and are predicated on a re-organisation aimed at delivering efficiencies and cost savings. These include pay cuts for all staff, office relocation and associated overhead savings. It is thought that up to nine redundancies will be made in the first phase and they will be in the paper’s circulation and advertising departments.

Mairead Kearns has been appointed advertising director of the Irish Daily Star and the Sunday World.

Former editor Michael O’Kane left the Star in November after he was suspended following a controversy over the publication of photos of the Duchess of Cambridge Kate Middleton sunbathing topless. Northern & Shell boss Richard Desmond slammed the publication of the photos and threatened to close the paper.

INM says Independent Star will remain as a stand-alone entity, with a separate board and identity.