Kellogg’s is to sponsor the new Breakfast With segment on TV3’s Ireland AM. The new celebrity interview slot will take place twice a week, broadcasting live from the MV Cadhla barge on Dublin’s Grand Canal. The sponsorship is a way for the cereal producer to communicate with Irish consumers at breakfast time.

Aideen Murphy, senior brand manager, Kellogg’s, said the partnership is a great fit for both parties. Paula McCarthy, sponsorship and promotions manager, TV3, said the association extends past sponsorship stings to include product placement and branding within the twice weekly segment.

Ireland AM reaches over half a million viewers every week. 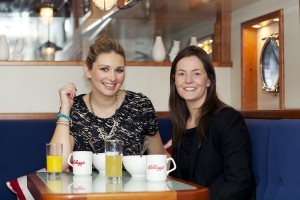 On the MV Cadhla barge are Anna Dally, Ireland AM and Aideen Murphy, Kellogg’s