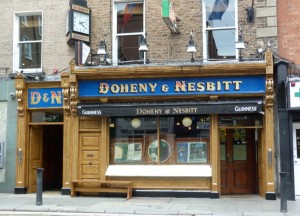 The Marketing Society is to host an evening debate on the role played by marketing in this month’s local and European elections in Doheny & Nesbitt’s pub on Dublin’s Baggot Street, around the corner from Government Buildings. A panel of three election experts will provide analysis, insight and discussion on the mood of the voter, the role of paid and unpaid media and the messages that worked and the ones that didn’t.

The three guest speakers lined up are Dr Adrian Kavanagh, lecturer in political geography at NUIM; former Irish Times political corr and now head of public affairs at Murray Consultants Mark Brennock and Noel Whelan, barrister, Irish Times columnist and former Fianna Fáil candidate. The evening gets underway in Doheny & Nesbitt at 6pm on Thursday, May 29. Tickets are €50 for members and €70 for non-members.

Bookings can be made at http://www.marketingsociety.ie/