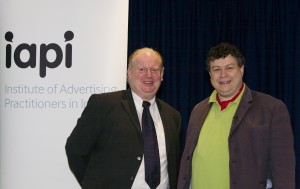 Seán McCrave (pictured left) has resigned as chief executive of the Institute of Advertising Practitioners in Ireland (IAPI) after almost six years in the job. A statement by IAPI said McCrave is “moving on to open up a new chapter in his career” but did not specify as to his immediate plans.

IAPI president Brian Swords, who will move to China soon to manage the TBWA’s McDonald’s account in Shanghai, praised McCrave for his commitment and contribution to the institute. McCrave also worked for The Irish Times, News International and as a planner at Javelin.

A full statement can be found on the IAPI blog http://iapi.com/blog/2011/11/sean-mccrave-today-announced-that-he-will-be-resigning-as-ceo-of-the-iapi-at-the-end-of-the-year/