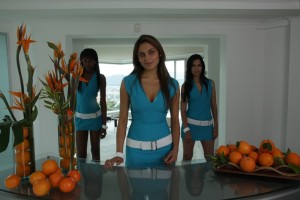 Reaction in adland has been mixed to Chemistry’s Club Orange viral. Some agency folk dislike the ad with a passion while others are at ease seeing curvaceous young women talking about squeezing their “juicy bits”. Irish International creative director Mal Stevenson says the ad has people talking – but for the wrong reasons.

For him the ad is “tragically wrong” for Club Orange and will put women off buying the drink. Stevenson says it has “no sense of humour, no smart insights and no shame”. He now feels about Club Orange the way he did about Hunky Dory crisps – once the fuss dies down all that’s left is an unsavoury aftertaste.

McCann Erickson chief executive Orlaith Blaney says ads are built around truths. For what it’s worth, consumers are told Club Orange has bits in it. The ad appeals to young men, who like a fizzy soft drink and ogling women with big breasts in tops two sizes too small.

Mediaworks director Fiona Field says it’s tongue-in-cheek ‘advertainment’ aimed at 15-30 year old males who might cry: “Oranges, I only see melons!” First Advertising director Una Kelly is less forgiving. She says, let’s call the ad what it is, a gimmick to rustle up cheap media coverage – tiresome rather than offensive to women.

If sex is used in campaigns, both Kelly and Stevenson recommend following the Lynx deodorant lead. Where will Club Orange go next? Use Jackass stunts maybe? Or Tarantino gore? Is there any way back from this “Benny Hill hell”? What Blaney wants to know is, will the ads help sell more Club Orange?

This article by Michael Cullen was published in Campaign Brief in the Evening Herald on June 29 2011.

Commenting on the Herald report in an email to Marketing.ie, Ray Sheerin of Chemistry described it as “shoddy journalism” and said it was “spectacularly ill-informed and biased”. ” The lack of a better informed opinion from target audience, agency or client looks like conspicuous avoidance,” Sheerin added.

The PR for Britvic’s Club Orange is handled by Jane McDaid’s Thinkhouse agency.

Britvic is to launch its Tango soft drink as an aerosol spray. If Turbo Tango proves popular with youths, Britvic will extend the idea to other flavours. The spray bottle took a Portuguese company a year to develop.