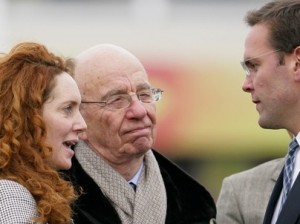 On the day that Rupert and James Murdoch faced questions from the media committee into the News International hacking scandal at Westminster, the beleaguered newspaper group has decided to adopt a strategy which sees it diverting a large part of its £7.8 million marketing spend to the Saturday edition of the Sun in a bid to protect its market share from the Daily Mail which is hoping to capitalise on its rival’s problems.

ABC figures for June put Sun sales at 2.8m copies, 800,000 more than the Mail. But it is thought that the two papers’ sales on Saturdays are much closer. Speculation that News International is soon to launch a Sunday edition of the Sun in place of the News of the World has been refuted by media agencies in London as ad revenues are comparitively poor in August – so any possible launch is likely to be held off until September.

Daily Star Sunday more than tripled sales on Sunday to 1.1m as News of the World readers switched in big numbers to tabloid and mid-market rivals. Industry estimates claim that four titles added 2.35m extra copies on Sunday, close to the 2.67m average ABC sales recorded by the News of the World in June.

The Daily Star Sunday ran a TV campaign at the weekend and offered readers its new OK! Extra supplement. But as 2.2m copies were printed on Sunday, over one million copies were not sold. Trinity Mirror’s tabloid titles, The People and the Sunday Mirror, performed well, with the Mirror almost doubling its sales to two million.

‘This is the most humble day of my life’ – Rupert Murdoch, at the House of Commons media hearing

Answering questions at the Westminster inquiry today, Rupert Murdoch said News International had no immediate plans to launch a new Sunday red top to replace the News of the World. He said he had no intention of resigning as head of News Corp. James Murdoch said he did not believe that the phones of victims of 9/11 were hacked by News Corp journalists in the US, but if they were he would consider it an “appalling” act.

The hearing was interrupted for about ten minutes after a shaving foam pie was thrown at Rupert Murdoch. The perpetrator who was apprehended and arrested by police was later identified as Jonathan May-Bowles, aka Jonnie Marbles, a stand-up comic and member of UK Uncut activists network, who live-tweeted his assault.

Murdoch did not accept any blame for the scandal. He said he had been misled by the people he trusted and they, in turn, by the people they trusted. Former News of the World editor and News International chief executive Rebekah Brooks later answered questions from the backbench MPs. She admitted she used private investigators for “legitimate” purposes during her time as NotW editor but denied any wrongdoing.